Yeah, everything depends on your perspective. But isn't the right answer the one the writer of the number intended? A little research would uncover the truth! 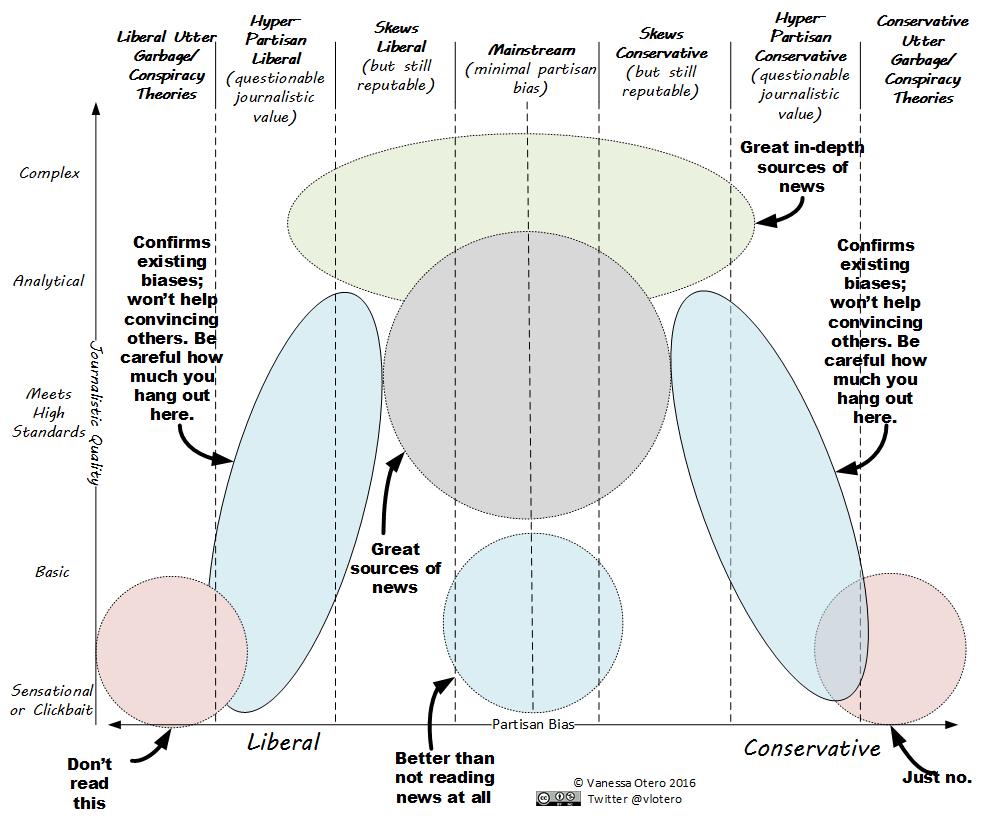 BLARE Method of Analyzing an Article 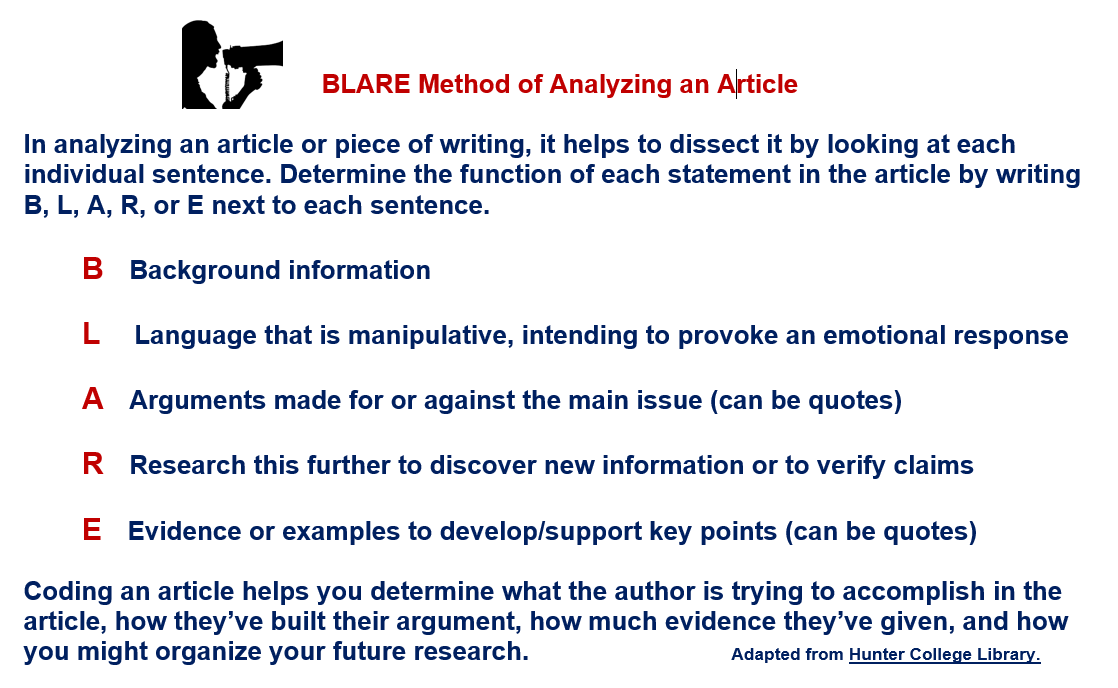 Review the BLARE article analysis method above. Carefully read through the article assigned to your group, and mark each sentence or paragraph with B, L, A, R, and E as applicable. Feel free to write other notes as well!

Manipulating with Language: Tricks of the Fake News Trade 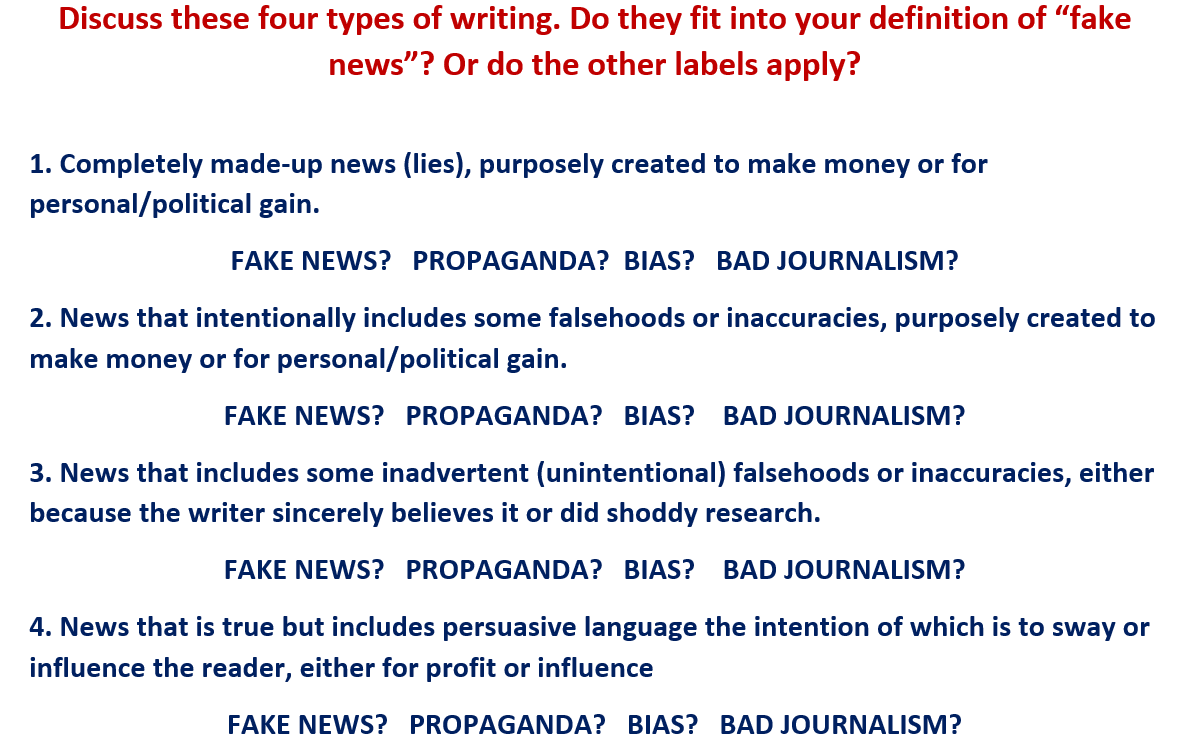 Journalism Codes of Ethics and Standards

Please research the following piece of writing in two ways: 1) Try and find the news outlet's journalism policy, code of ethics, or the standards that govern the work of their journalists. This list by the American Society of News Editors may be useful in your search, but if your news outlet is not listed, continue searching online. 2) Find out if the writer of the article is a journalist. If they aren't, what kind of background do they have?

How do you know? 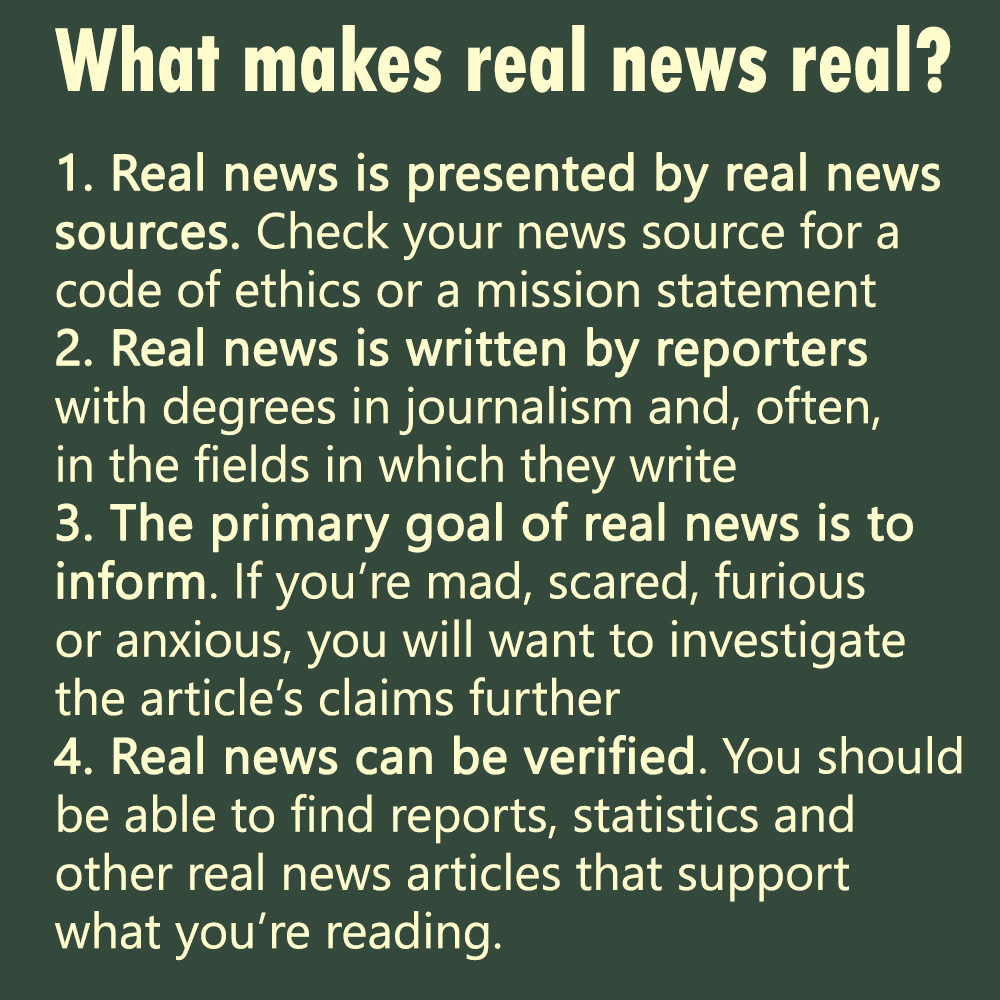 2. Now, research Vanessa Otero's chart; find out what people think of it. Read some positive and negative criticism of it. Has anyone published their own version of the chart? Write a one paragraph summary of what you find and how you feel about your own placement of news outlets on the grid.

"Article quality can vary greatly even within the same news source. One should be able to rank an individual article on the chart in the same way one ranks a whole news source. So, what makes an article/story high or low quality? It’s hard to completely eliminate one’s own bias on that issue, but one way to try to do it consistently is to categorize and rate the actual sentences and words that make it up its headline and the article itself. In order to try to rank any article on the chart in a consistent, objective-as-possible manner, I started doing sentence-by-sentence analyses of different types of articles."

"Americans Think ABC and CBS are Most Credible News Sources; The Onion and Fox News Least. "

"How Does Your Favorite News Source Rate on the Truthiness Scale?"

"Here are the Most and Least Trusted News Outlets in America"

Here are the two charts the class built Wednesday in class. 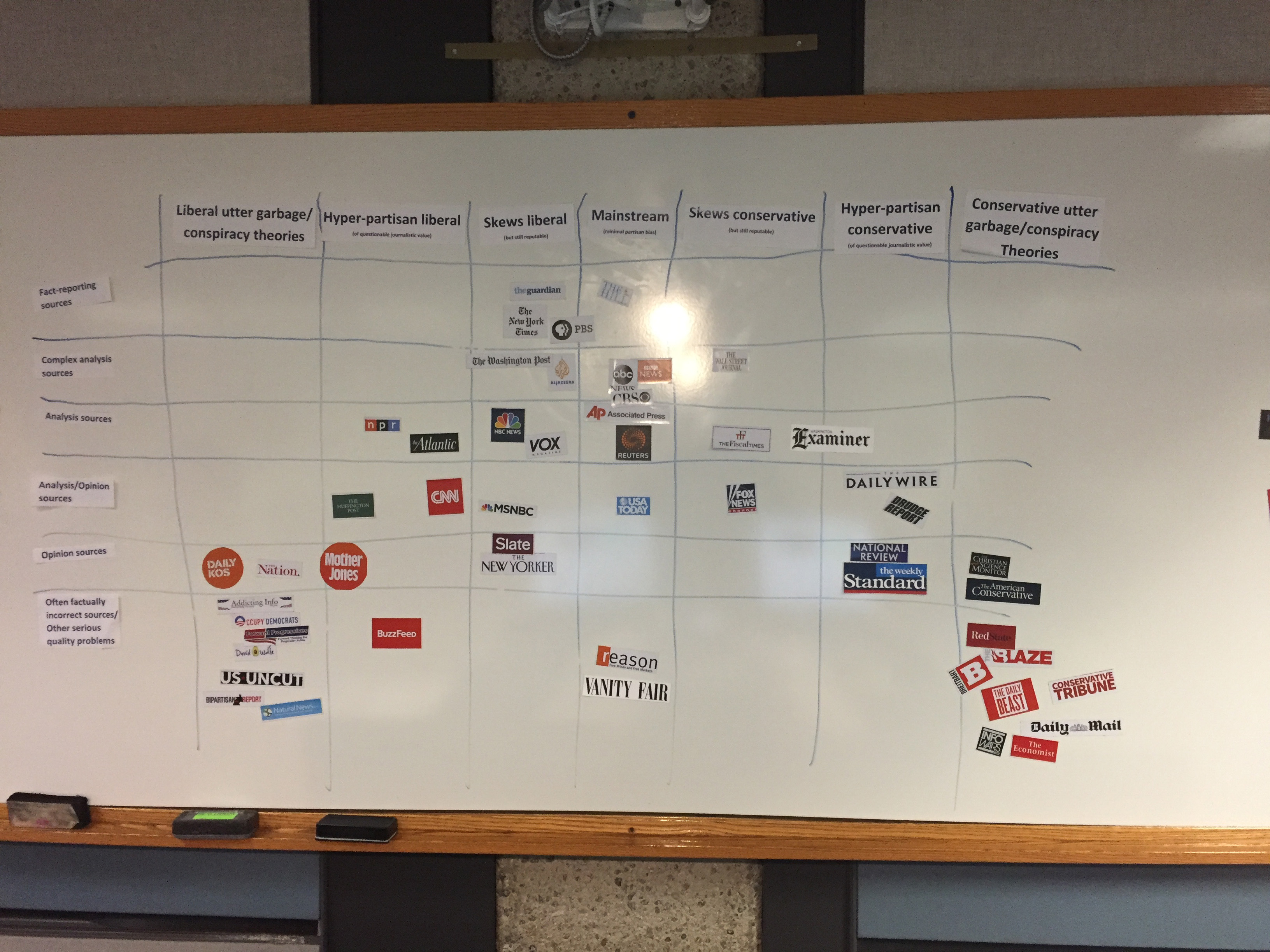 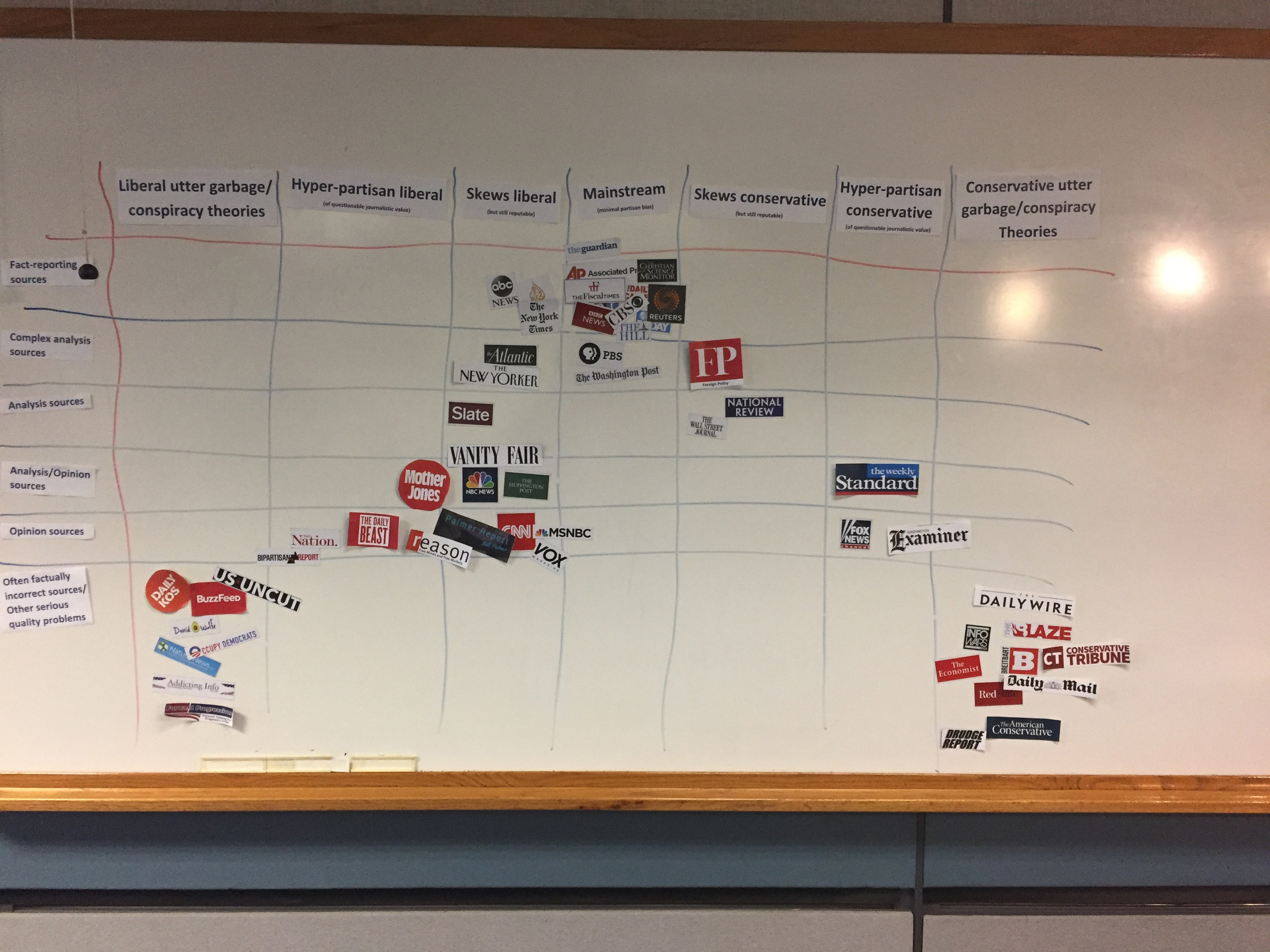